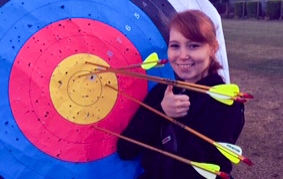 Sometimes, new things come easy and at other times they can be a little trying. During the time that I have been coaching, I have seen both sides and it never fails to amaze me how some people can put aside their troubles and come good on the archery range.

Just a few short weeks ago (One have-a-go session and three lessons to be precise) I met a young lady called Imogen, yes another Imogen for AoR. From the have-a-go session Imogen showed that she had great style in her shooting and that she could be one to watch. Following the usual health and safety part of the first lesson we began shooting and I saw again what I’d seen during the trial session. As a result, during this first lesson we moved onto more advanced things and beyond the usual lesson one techniques. We started shooting with an open hand and worked on refining the various steps through the shooting phase. Amazingly, an open hand was nailed within two shooting ends and Imogen was quickly hitting gold following a quick tip from Geoff about straightening her hips during the setup – As a basic coach, I still miss some of the more advanced things.

By the end of lesson two we’d ditched the wrist sling in favour of a shoe lace (thank you Lauren) and introduced a long rod. We moved the boss back from 10m to 20m and worked on using her back to draw the bow, rather than her arms. Again Geoff helped with a tip to make the shoelace shorter, so that the bow did not swing so much and we were again shooting red inwards for most of the session despite an aching shoulder but a refusal from Imogen not to sit out the session, although there were a couple of couch forced ends sat out to recover and to avoid straining anything.

Needless to say, by the end of lesson two Imogen was pushing my coaching skills and shooting equally as well as some of the juniors (at this point) that have gone on to shoot at county level.

So into week three and things took an unexpected turn and not for the better. Full of enthusiasm, Imogen completed a warmup and set about shooting. Again, the boss was at a challenging 20m but most of her arrows dropped low and at least one every end for much of the session dropped under the boss. Puzzled, I sure was. Her setup was sound, her posture good, her release no different, was this a session where I was to let her down?

Out came the iPhone and after studying some video footage of her shooting, we made a few changes, the main one to her anchor point. We made it tighter so that she had three touch points and boom (as the teenagers seem to say these days), central and nicely back to the middle area of the boss, despite the inevitable tiredness setting in following a good number of arrows having been shot during the session.

So why this story? Well this for me, has been a lesson all about Persistence and teamwork. Imogen not once lost heart and readily tried anything that I asked of her. Many young archers (and seniors) would have put the bow away and called it a day. Not Imogen, she kept smiling, gave me the odd quizzical look and even hit me with a superb question that still has me questioning why we don’t have protection for both hands when pulling arrows. Feeding on her persistence, I dug deeper, worked harder and studied her form to find the source of the issue. Someone even suggested one of the arrows might be faulty, but I’d already checked for that and all was good.

Working with Imogen (like several of the juniors that I have taught over the years and they know who they are) is like being part of a team. I ask, she tries, she feeds back and I re-evaluate, think and try something different. Again, never does she question, argue or give less than 100%. Like several juniors before, Imogen is yet another reason why I give up a Friday night to have over to Raunds and coach beginners.

So, feeling pushed to my limits and not wishing to let Imogen down, we approached the line for one last end (well it turned out to be the last but one, but hey!!). She settled onto the shooting line, we ran through everything and she applied everything that we had worked on during the session, including the new anchor point. 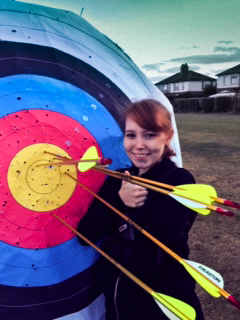 Now, remember that she is only on lesson three, so less than 8 hours shooting if we include the have-a-go AND I’m pushing her ‘well’ beyond the beginners course as far as technique and ability are concerned. The five arrow end went something like this:

A glance back to me and the smile was broad indicating that she was relaxed and things were coming good. However, At this point things were speeding up, I was concerned about over confidence and I wanted her to make this a five gold end. I therefore had to advise Imogen to slow down a little and use the opportunity to put the bow on her foot to let her muscles relax. Also some words about having to make every arrow find the gold and that just because the first three had, it did mean that the final two would without her making them.

This was an amazing end of arrows from a young lady who never gave up throughout the session despite the wind and arrows dropping below the boss throughout most of the session. This was an end of arrows that I will remember for a long time and it was hugely deserved by a young lady with only a few hours coaching, at a fair distance and who had the perseverance to make things come good in the end.

‘This story’ is an example of why I love being part of the AoR team and what we, as a club, do at Archers of Raunds.

Imogen, all credit to you!!!