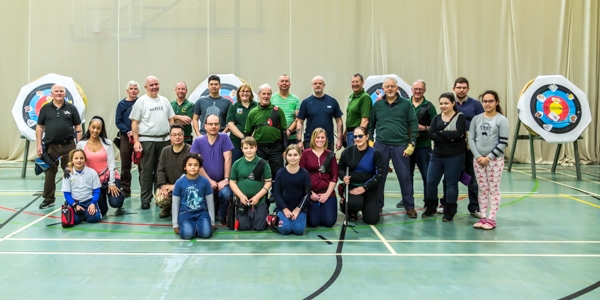 It was with some trepidation that  awoke this morning, packed up the AoR Fun Shoot targets and other paraphernalia and of course my camera case.  When I first suggested this shoot, someone said to me “Don’t over complicate things”, but me being me, that is exactly what I’d done.  Mixed with trying something completely new and untried, the session was therefore set to be either a mitigating disaster or the best laugh ever.

However, there really was nothing to worry about because the morning session went wonderfully well with people laughing and enjoying themselves from the off.

This was a shoot where “Anything Goes” and that became clear from the outset.  I’d promoted this as a 20m shoot but then realised that the usual line that we shoot on is blank across part of the hall (a line on a badminton court). So a quick last moment decision and the first of many, saw the shooting line moved back by about 3 or 4 meters.  So what about everyone’s sight marks, well you get sighters right to sort that one out????

With that the archers set about putting some scores on the board.  Now, Matthew had given me an idea on Friday.  He’d asked me whether the scores could go into minus.  Of course, without giving the game away, I said of course – afterall this is a shoot where anything can happen and probably will.  So, everyone shot their 12 arrows per team and we had plenty of nice scores, nice groups in the gold and everyone came back from the targets looking a little too happy with themselves.  Enter twist number three. 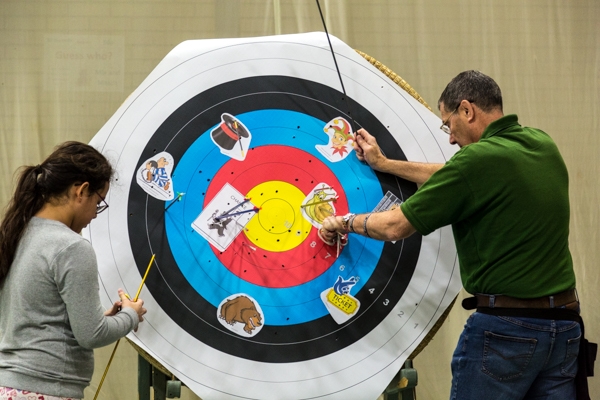 The targets that we were shooting on were enhanced with pictures that put you in jail, one you chance cards, jokers, etc.  I’d decided on the way over that IF all of the teams did the usual archery thing and simply shoot for the gold, well, I’d mix thing up a little and set the tone for the shoot.  Yup – I zero’d everyone’s score sheets for the end – Hey we had an end of sighters anyway <rofl>.

Yes the rules were a little complicated but with the help of four strong team captains people soon got over their apprehension and the idea behind this shoot slowly began to dawn on people, well quite quickly actually because by the third end we were earning and playing chance cards and the teams could then see what I meant by the fact that “I was NOT in control of what happening in this shoot.  It was up to the teams to earn, claim and play cards that changed everything. 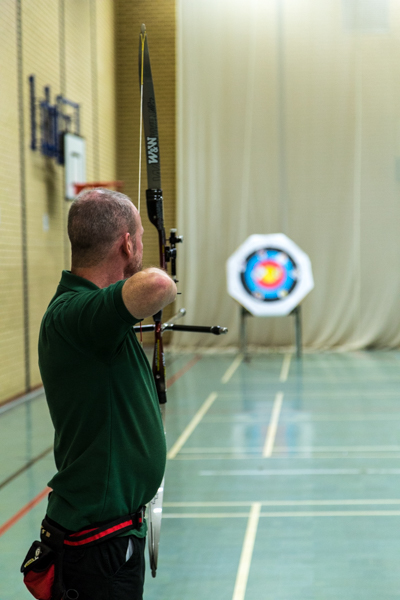 You really needed to be there to understand the cards that were being played and how they affected the teams scores.  However, our visiting team, up from Milton Keynes, SALT, quickly took a strong lead and on many occasion I noticed them checking what the other teams were doing.  Tactics were already beginning to play their part.

However, how to you play your tactics where a whole team plays a joker and finds themselves shooting a club barebow, when most of the team had not shot barebow in a long time, leaving the team captain to coach barebow on the line.  Like I said anything goes.

Matthew did a great job and his team were rewarded with a nice haul of points for the end.  Annoyingly, they got to play the card again later and knowing that misses now scored 50 points, Eddie (English Longbow archer) stepped up to shoot all of the teams 12 arrows, perfectly legal and again tactics playing their part.  Tony’s team noticed what was going on and in the spirit of the event, he decided to shoot one of his arrows straight into the gold of Matthews target.  That confused us for a moment when we came to score, but nice one Tony, I really enjoyed that moment. 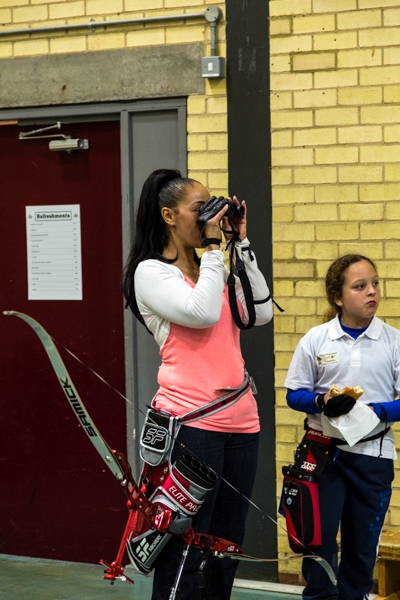 Another moment that I thoroughly enjoyed was one of Amanda’s (from SALT) shots.  She’d never taken out the X and for a few anxious moments see studied the boss from the waiting line trying to see whether she’d hit that elusive X on the boss.  It’s hard to tell evening with a scope because the hall lights cast awkward shadows on the boss form the arrows.

Going forward full of  anticipation, I was hugely pleased to see her arrow firmly embedded in the X and we had to celebrate her achievement with a impromptu round of applause.

At AoR, it’s not always about the big wins, the club and county records.  Those are important to archers as they progress but, for me, it’s those small personal achievement moments that make archery so much fun.

The shoot continued to score sheets being swapped back and forth, much to Matthew and Tony’s annoyance, delight, bewilderment (I’m not quite sure which).  Score sheets were amended with additions and subtractions from the Chance Cards and then the Jokers started to come out. 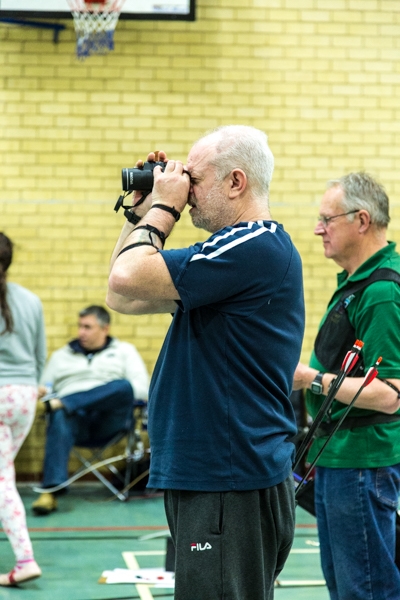 On one end, Martin’s team played a Joker which had them sit out and quietly not shoot, much to the amusement of the SALT team to quickly noticed and began pondering on what was going on.  Neil, there was no need for the binoculars on this one, your team might have been doing well, but Martin’s team claimed a whole heap of points for doing nothing and it actually became a Fun Shoot winning end for the team.  With SALT well out in the lead for so long and reminders form me that “Anything can happen”, the whole shoot turned on its head at the end.

Another of my classic and favourite moments from the shoot was where partners Matthew and Michelle came to blows, literally.  I missed the actual event, but with lots of laughing going on I had to find out what the nature of the amusement was.  Matthew had done something (annoying I can’t recall what but maybe someone will fill in the details in a comment below) which obviously Michelle was not too happy about and she marched over to his team and gave him a good slap or six.  All if good part and what fun, this really is what this shoot is all about. 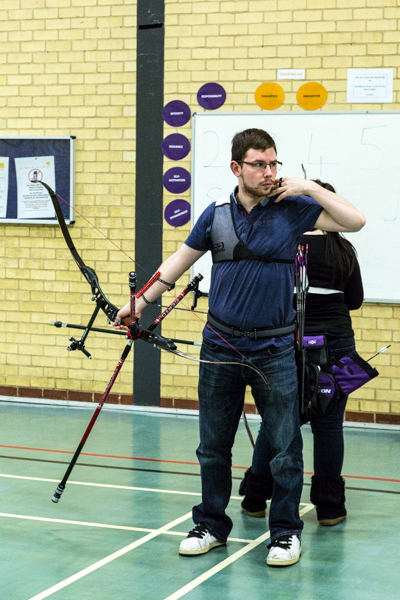 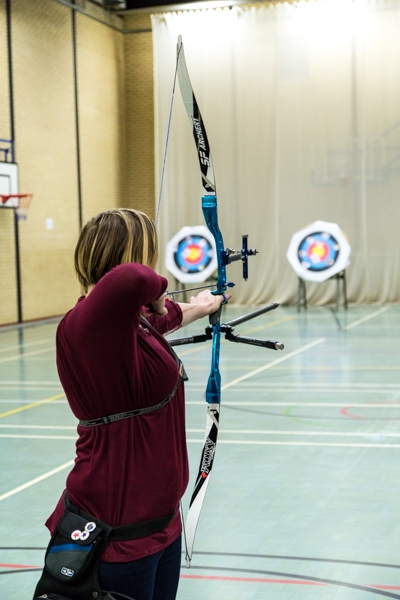 All along the shooting line were smiles, laughs, confused faces and bewilderment, oh and a little exasperation at time.  So, was I worried.  Not any longer, the shoot was going really well and the moment that I knew that we’d got the balance right was when the team captains began sharing the deeds of their cards in front of the archers and best of all was when the SALT captain took to the floor and addressed the other teams with a nice thank you for making them feel so welcome and giving them 200 points each, yup another chance card to mix things up a little.  I think that this is the first time that I have seen a visitor jump out and take control and it was immensely warming to me to see this happen and it really summed up the whole event for me:

Finally and by no means last a few thank you notes from myself.

Firstly to Leza for taking time out of a very busy day to lay on the catering and especially the bacon rolls which were the icing on the cake.  I know that you needed to be in Lilleshall to pick up Ruby in the afternoon, so I was hugely grateful for you taking this time out to support the club.

To Cate for helping me to keep the rules in check and to help keep things running smoothly.  Yes, I did notice that you asked me a lot of qualifying questions for the first couple of ends and then cruised the waiting line helping the teams.

To Lauren, who (without reading too  much into what I was planning) helped me to finalise the shoot in my head and then who helped to create the countless cards and the target faces.

Finally, to all of the archers who came along to support the club’s fun shoot and especially the team from SALT.

So what next?  Well I’ve already had reports from young and not so young that they want to do this shoot again VERY soon.  Plus, the one person that had been asking me to put on this shoot ended up having to shoot at ArcheryGB in Lilleshall this weekend and I believe that she was very disappointed to miss this one.  Let’s do this again in January or February at a time when young Ruby can also join us.