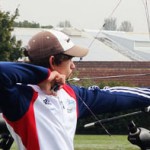 Jon Bull of Targetcraft Archers has been short listed for the Kettering sports personality of the year!!

Visit Kettering Borough Council website to see the write-up and view the other candidates.

You can vote for Jon by email at: sportsawards@kettering.gov.uk and put his name in the subject box. Voting closes at Midnight on Tuesday 30th October 2012.

A win for Jon would be great for Archery in the county so get voting!

Jonathan Bull
17 year old Jonathan Bull has represented Great Britain (top qualifying Cadet Gent), East Midlands and Northamptonshire, setting many County records.  In May he represented GB in Croatia at the Junior Europa Cup coming home with a team Bronze medal.  In July he went to Denmark with the GB team for the Junior European Championships (where he was ranked 4th) and won Cadet Gent team bronze and cadet mixed team Silver, narrowly missing out on Gold.  He has qualified for the selection shoot for a place on the GB team going to the Junior World Championships in China next year.  Jon is the Senior Outdoor County Champion and Junior Indoor Champion and is a member of Targetcraft Archers in Burton Latimer.