It has been a while since I have had to be up early for an archery tournament, other things just seem to be taking over lately and Lauren has not been shooting as much owing to work and some other pressures on her time.  However, the club had asked me to take some new photographs for the website and publicity purposes, so it was up and out to be over at Raunds for 08.00.

I’d been unable to help setup the field on the Saturday and I felt for everyone that did make the time because the weather was just plain horrible for such a job.  This morning though, the sky was clear, the breeze was minimal and it was ideal for shooting.  Whilst the sun would stay away for the early part of the tournament, it did say hello just before the lunch break and the time that I had to leave.

As usual, the AoR team put on a great tournament.  Heather was to officiate and following a field inspection with only a couple of minor adjustments, we called the archers together and I was asked to take the lead for the welcome address.  After running through the usual housekeeping items and introducing Richard (our tournament organiser) I handed over to Heather, who ran through the requirements for the day.

I’m normally hiding among the juniors to give them help as the shoot begins, but today was to be a little different.  Not only was I there to get some photographs, but I was also approached by Debbie to give her a hand. 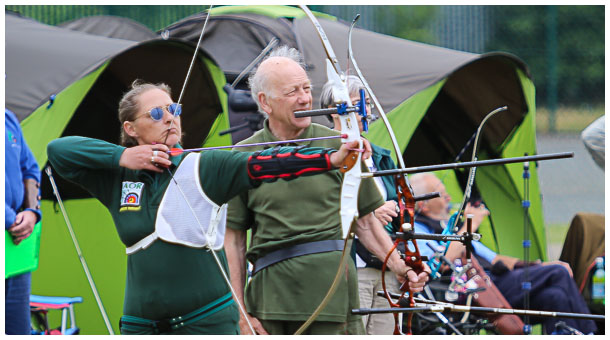 I first met Deb back in January of this year for an initial shooting session to see how she would get on.  Having shot before but since losing much of her sight, this was an unknown session for the both of us.  I have worked with blind and partially sighted people during my younger years, but never within the archery world.  That said, this initial session went very well and she immediately booked onto our next beginners course for the end of January.  Six weeks later and progressing really well, she completed the course and became a full AoR shooting member at the club.

So, you’d think that she would now take the opportunity to settle in slowly and take things a little easier.  Not Deb, just a couple of weeks later she asked me whether she would be able to shoot at the clubs indoor Portsmouth tournament.  Well why not, she was working hard, getting some good scores at the distance and it would be a lovely way to finish the indoor season.  So, on the 29th March and just two months into shooting she was on the shooting line and sending arrows whistling down the hall to score another personal best of 285 for the Portsmouth round.

Fast forward just ten short weeks, a new aluminium bow and a good few hours practice and we are now standing on the shooting line and Deb is about to shoot her first outdoor tournament.

The tournament was made up of the St George, Albion and Windsor rounds.  This enables the club to cater for all ages and abilities and it is has been a popular tournament year on year for the club.  This was borne out by a good number of visitors who had joined us for the tournament today, despite a number of other shoots being held this weekend.

Deb would therefore shoot the Windsor round in the senior Ladies category.  This round consists of three dozen arrows at 60 yards, 50 yards and 40 yards.  I’d seen Deb shoot at 40 yards and she’d told me that she was fine at 50 yards, but 60 yards was a little unknown for me.  She had sight marks for each distance so I was happy and, on request, I set her sight mark for 60 yards and we headed onto the shooting line for the initial sighters – six arrows shot in groups of three.

Deb asked me to be her spotter for the sighters.  This is allowed for a visually impaired archer and it is important because your sight marks often change from location to location and also in different weather conditions.  She was shooting at home, so that was good and the wind was negligible, so we were set.  I don’t have the best eyes, especially with hayfever setting in, but I had nothing to worry about.  Her first arrow landed at 9 o’clock red with her second high blue (from memory) and the rest slightly low of the centre with the last arrow landing low black’ish.  I quietly called each arrow as they landed so as to not interrupt the archers around us and then headed off to work with one of the juniors who was shooing in his first tournament after only finishing his course about four weeks ago. 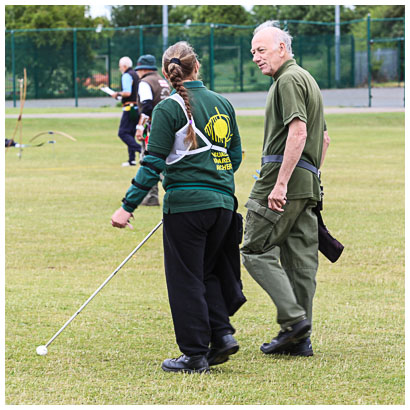 I came back to Deb a couple of times, but she was being looked after by Michael who she was shooting with and she was happy and content with her shooting.  My job was done.

I had to leave at lunchtime, so I did not see too much of Deb’s shooting during the day but it was pretty damn good for a partially sighted archer with only a few months experience.

Deb opened her scoring with six arrows on the target and it would not be until the fourth dozen before she had a wayward arrow and then only four misses at this longest distance, not bad for a partially sighted archer, in fact pretty good for any archer with Debs limited experience at shooting this distance outdoors.  She’d close out the distance with a fine 145 made up of 45, 59 and 41 scoring dozens.  This included four golds.

Next up was the 50 yards.  still a tough distance with someone Debs disability but she nailed the distance with only two misses and 174 for the distance (40, 60 and 74).  That gave her a nice 319 going into the 40 yard distance after the lunch break.

Now the only fly in the ointment and a lesson to learn.  I see this all of the time and we are all reminded that score sheets need to be checked because the score that we sign for is the score that is registered and which counts.  Deb signed for 511, which was a great score for someone with her experience and with impaired vision.  However, following a later double check at home and once the excitement of the day had subsided, she found that she had actually scored 522, which is even better and raised her personal best nicely.  I guess she’ll be going for 550 next and I’ll bet that she’ll make the 600 pretty soon.

It was great to see how Debbie shot and all of the other archers.  There were some great scores, some wonderful first tournament experiences and even a possible record to be claimed.  A wonderful day, hosted and executed with perfection by the AoR team – nice work again guys.